It’s that time of year

We still have so many wonderful fresh fruit and veg to look forward to, but there's no denying that the seasons are passing. With only about four months left of 2021 (can you believe it!?), it's time to start thinking about winter. With the convenience of grocery stores and fresh food shipped to us from warmer climates with longer growing seasons, the worry of a long winter without food is not as large of a concern as it may once have been. There is something to be said, though, for the security of knowing that no matter what comes, no matter what struggles we as a community face, our food system is secure. This past year has taught us that. Of course, our local farmers are at the forefront of local food security! But when the snow blankets the ground, and the farmers' market is closed in January, and only a few beloved veg are producing, the answer comes back to us. I’ve personally been blessed to profit off my mother’s efforts of canning, preserving, and freezing. Growing up, every Monday in Winter, for as long as I can remember, my mom would crack open a large jar of canned green beans for dinner. Later in the week, would come canned beets, and so forth. (Sometimes even delicious canned pears with potatoes!) It means a lot of work in the summer at the height of the harvest season, but it’s all worth it on those cold winter nights.

We’re so lucky to have Chef Katherine Jones join us this Thursday evening for a cooking class all about food preservation! She will be sharing five different ways to capture the best flavours of fresh farmers market produce and save them for future uses! We are so excited to learn some new tips and tricks from Chef Katherine.

Chef Katherine has been with Growing Chefs for the last 9 years, inspiring London’s youth in the kitchen! Her passion lies in using local ingredients and foraged finds. We are so excited to learn some new tips and tricks from Chef Katherine!

The cooking class is now held Outdoors on the South side of the market Square, at 5pm. See you there! Last Thursday, Kimi Abdullah from Petojo brought her passion for food and her good humour to the Market! For her cooking demo, she demonstrated how to make the delicious Indonesian corn fritters, Bakwan Jagung. The great thing about having cooking demonstrations at the Farmer’s Market, is that we get to cook with and enjoy all the amazing fresh produce from our farmers; Corn from Thames River Melons, carrots from Greystead Gardens and chilli peppers from Entangled Roots. Kimi had some hot tips for us on how to pick the freshest corn – always pick corn that has moist tassels at the top. Check the weight of the corn too, if the ear is heavier that means it hasn’t dried out yet!

After preparing the veggies, Kimi mixed all of them in one bowl with the batter, then added that to a hot sizzling pan. When cooking the corn fritters, Kimi suggests cooking them just like a grilled cheese, once both sides are crispy they are good to go. A good non-stick pan is key for this recipe. Once they were finished, Kimi served them with Petojo’s delicious sweet chilli sauce. For those looking for a drink pairing, Kimi suggested that they would be great with a mango or passion fruit drink, similar to ones they enjoy in Indonesia. While we sat and enjoyed our samples, Kimi shared with us the story of how her and her brother Anthony started Petojo, and what they are up to now. The food from our cooking demonstrations has been incredible but the best part by far has been learning from these chefs and about all the amazing talent in our city!

This Thursday’s Farmers’ Market from 4 to 7pm, Dine in 519 is hosting a food drive in support of the London Food Bank and Atlohsa. They will be collecting non-perishable food items, canned goods, hygiene products, bottled water and cash donations.

They will also be giving away products from local vendors throughout the day and a grand prize for the largest donation! Come on out and show your support for our local London community! Nature in Our City - with Glenn Berry

The rivers and reservoirs around London attract and sustain these majestic black and white raptors that feed almost entirely on fish. You may have seen an Osprey suddenly dive feet and head forward into water, lift off, and fly away with a fish in its talons. The good news is that the fishing must be excellent as Osprey numbers are increasing in London.

I am indebted to Ric Symmes for mentoring me about Ospreys in London. His report on Ospreys for 2021 is on Nature London’s website. http://www.naturelondon.com/london-ospreys-are-thriving/

Walking around the trails at Harris Park for the first time last January, I saw an empty Osprey nest on top of Labatt Park’s third base lights. This year, the “Labatt” Ospreys returned to London at the end of March and had two very large and active offspring by July. Of course, baseball fans are distracted when they see an Osprey fly over the field. You might see an Osprey perching on one of the lighting towers or eating a fish on the raised platform in the field behind the third base bleachers. These offspring are still dependent on adults for food, but spend much of the day away from Labatt’s Park.

It is not too late to see Ospreys before they leave. A great place to see them is Greenway Park. The two “Greenway” offspring have just started to flap their wings. You can see them flying or at least trying to fly. On July 26, I photographed the mother and two juveniles. The father was in a nearby tree, but I missed seeing him deliver fish to the nest.

If the juveniles are crying, they are probably hungry. But if the mother is crying, she is in distress over an unwelcome bird in the sky or people too close to the nest. Given the height of the nest platform, the roadway into the treatment plant is a bit too close. Please stand no closer than the pathway to the nest. Another nest is on a very tall lighting tower at Western University’s TD Stadium. As of August 2, two of the three offspring were already flying over the field next to the nest. Binoculars are needed to see much detail. And a telephoto lens is needed for photographs. This photo from August 2 shows an unwelcome Osprey coming very close to the nest containing the offspring. One of the parents swooped in and drove the intruder off.

The writer is a novice amateur naturalist who depends on Internet resources and a few field guide books for species identification from photos. iNaturalist is a great place to start: iNaturalist.ca

The first step to becoming a naturalist was to become a birder five years ago. The learning process was accelerated by taking photos and then studying them at home. More experienced birders were always happy to share what they knew. The next step was to turn the camera on butterflies and other large insects. Skilled Accents will be joining us as a pop-up vendor for both our Thursday and Saturday Farmers’ Market. Skilled Accents is a social enterprise founded by Kay Habib, an interior designer who believes in making a difference in the community.

Their vision is to reduce unemployment in marginalized communities while also reducing fabric waste. They employ refugee women located in London to create décor products from recycled fabric collected from local furniture and drapery stores. They believe in having a triple bottom line for their business; People, Planet and Purpose. Swing by and discover their beautiful hand-made pillows and masks! This Thursday, we are welcoming back London Cycle Link from 4pm to 7pm! London Cycle Link is a community based organization here in London that campaigns and advocates for safer streets, so that bikers of all ages and abilities can ride more and worry less. They also host a self-serve bike repair shop, Squeaky Wheel, where they provide tools and used accessories and parts to fix up your bikes!

Did you also know that through their “Bikes for Newcomers” project they provide newcomers in London with refurbished bikes to help increase their mobility and welcome them into the the London cycling community?

Say hi on Thursday and learn more about all the cool things happening at London Cycle Link! On Thursday, we are welcoming Frank Ridsdale to the Farmer’s Market. Frank is a London, Ontario based singer songwriter who has been performing for more than 40 years! We are looking forward to jamming out with Frank this Thursday from 4-7pm!

On Saturday, three musicians from the Light of East Ensemble will be performing from 10am to 1pm. Mary Ashton, Joel Jacobs, and Panayiotis Giannarapis combine their unique musical styles to create a beautiful Eastern Mediterranean sound. Mary can be heard playing her violin; Pani plays the Greek Bouzouki; and Joel brings his drumming experience with the Egyptian Doumbek. 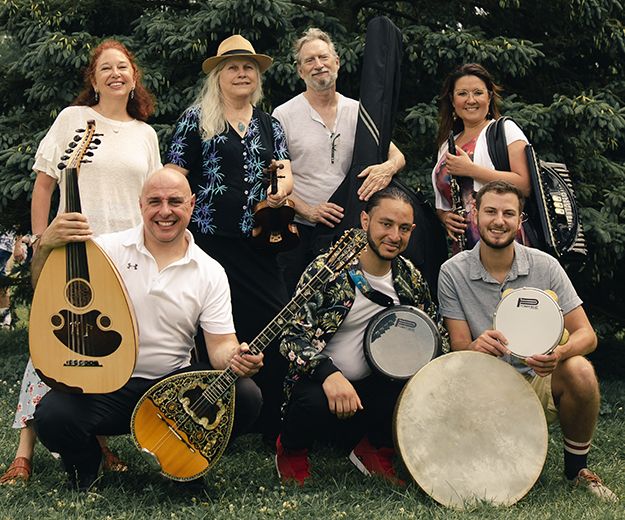 Visual artist Catherine Eichstedt will also be joining us on Saturday from 10am to 1pm! Catherine uses a free, loose, bold style to express what she finds inspiring. She paints en plein air (outdoors) or in her studio still life or using her imagination. Her approach is a combination of expressionism with a painterly style and at times she uses some abstraction. Catherine has been drawing and painting from childhood and studied at the U of T, majoring in Fine Arts Studio. Each summer for the past 13 years Catherine has studied at the Haliburton School of the Arts. Currently she joyfully shares a beautiful, bright studio with two other London artists. This is the list, folks! See who you can find at the Farmers’ Market this Thursday, August 12th! Click on their names to find information on pre-orders and to learn more about their farms and businesses! This is the list, folks! See who you can find at the Farmers’ Market this Saturday, August 14th! Click on their names to find information on pre-orders and to learn more about their farms and businesses!